This summer, we’re diving into the BBC’s list of 100 novels that  shaped our world.

One of the categories is identity, and the BBC panel selected these 10 books:

It’s a bit of cheeky of the BBC panel to call this a list of 10 books, when it includes all of the Harry Potter novels and all of the Twilight Saga!

Here in Oxford, the Ashmolean Museum reopens on 10th August 2020. Dr Beatrice Groves has written a tour that takes you round the museum to find historical objects illuminating some of the real-world sources from JK Rowling’s novels. If you’re visiting, take her Wizard Tour of the Ashmolean with you, and get inspired.

One curious effect of the popularity of the Harry Potter books is the impact it’s had on the global owl trade. Anna Nekaris and Vincent Nijman, both of Oxford Brookes University, explored this in a journal article you can read for free in  our institutional repository, RADAR.

For an earlier generation, the quintessential young boy coming of age was, of course, Adrian Mole. For Jodi Wilkinson, who works in the library’s Special Collections team, this is a book that can be read and re-read as an adult too. She told us:

The Secret Diary of Adrian Mole Aged 13 and ¾  documents Adrian’s life, thoughts and reflections from January 1st 1981 to April 3rd 1982 – the outbreak of the Falklands War.

Through Adrian’s diary the important events and issues of the early 80s are covered such as the Royal Wedding, increase in divorce and single parent families, lack of opportunities for working class youths, a troubled NHS, redundancy and unemployment, Thatcherism and the impact of politics on family life.

Alongside these Adrian also has his fair share of typical teenage angst and problems such as puberty, his first romance, school and bullying. Adrian is slightly different to his peers at Neil Armstrong Comprehensive as he’s an intelligent, studious, nerdy, sensitive boy who can be obsessive – at times naive – as well as a born worrier with health anxiety and a bit of a snob. He thinks he’s better than his working class council house upbringing and desperately wants better and to be a success when he leaves school.

Through multiple readings as I’ve got older I’ve realised I share many of Adrian’s quirks and personality traits as well as his cynical, catty, dry sense of humour. I also see Adrian in my fiancé Martyn and in dear friend Mark. For me Secret Diary is one of the most realistic and accurate portrayals of everyday life in the early 1980s for an ordinary family and one of my favourite books of all time with the television series well worth a watch. 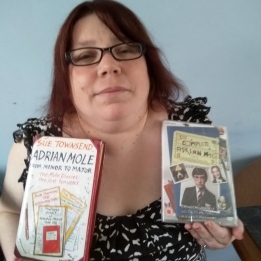 As Jodi notices, Adrian Mole provides a detailed insight into 80s Britain, with its smoking, strikes and limited TV channels. Similarly, Edna O’Brien’s The Country Girls gives an evocative description of a past time, in this case 1950s Ireland. The Country Girls was initially seen as controversial, and was banned in Ireland. Learn more about the fearless Edna O’Brien in this documentary from 2019, on Box of Broadcasts.

A novel that has received less attention than some of the behemoths on this list is So Long, See You Tomorrow by William Maxwell. As a result, it’s got a very short Wikipedia entry.

If you’ve got some time over the summer and fancy extending this page with more content and links, then do it! Let us know how you get on.

Happy birthday to Harcourt Hill, which was officially opened 50 years ago today!
More new books have hatched and are being introduced into the wild, where they can be read and borrowed.
Working on a group project or presentation? Need a space to collaborate and concentrate?
Books to celebrate Black History Month. We have two reading lists on Activism and Anti-racism, access them via the “Find your module reading lists” link in our bio. #oxfordbrookes #hellobrookes #blackhistorymonth
Every @oxfordbrookes course is supported by a specialist Academic Liaison Librarian.
It’s so satisfying when everything is organised and you can quickly find what you need.

Making the best use of Library resources