Across all our libraries we have continued to work at providing wellbeing activities for our staff and students. Read on to see what we’ve been up to… 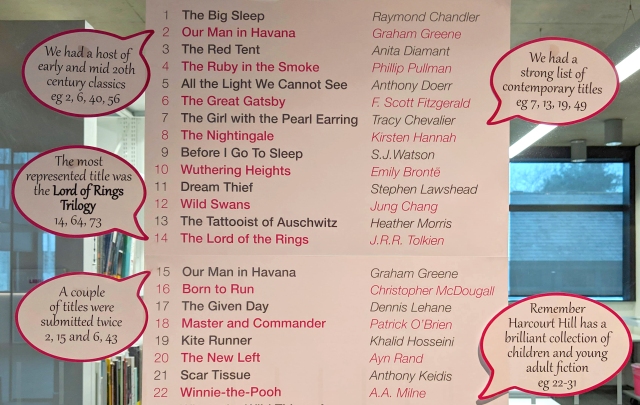 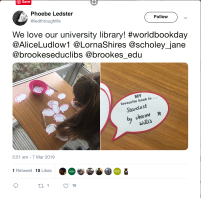 World Book Day 8 March (all campuses)
We celebrated by asking students in the libraries and online to submit your favourite book, via a little speech bubble card. Over the space of a day, we received nearly 80 completed bubbles and picked up some further suggestions on Twitter and Instagram.

We had a glorious array of children’s and young adult texts from classic titles,19th century novels, contemporary books as well as titles that were not widely known. JRR Tolkein’s Lord of Rings Trilogy was the firm favourite. Read more here

Treats and Time out (Harcourt)

These ‘time out’ activities were provided on a regular basis over the period of a month, trying to concentrate on times when the students were on campus. The treats were a great hit. The hope was that regularity would encourage participation.
Lemon and Lego 25, 28 March
Banana and Board Games 2 April
Jaffa Cakes and Jigsaws 25 April 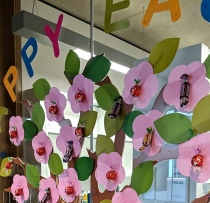 We pinned chocolates daily to a tree and invited students to have one as a little treat on the build up to exams.

Positivitree 30 April (All campuses)
During revision time we asked students to suggest things they do to help them get through their exams that could be helpful to their peers. We had some great suggestions along with a few that had to be hastily removed!  We also provided, play doh, lego, bubbles and word finders to encourage students to take a break from their studies.

African Hospital Libraries (AHL) Cycle Challenge 24 May (Headington)
An opportunity to make and share cakes for this good cause.
Dr Claire Blacklock (co founder of AHL) was cycling 30k between the Oxford NHS hospital and university health libraries raising funds to convert a nursing station into a library in Sierra Leone. We were 5th on her visiting list of over 30. Claire was overwhelmed by our reception and the sight of our display with balloons and a cake sale. We raised £64.32 towards her cause.

Claire gave a brief speech about the cause and we were delighted to hear that because of the health care courses run at Brookes, the withdrawn books we supply are vital to health practitioners in Sierra Leone because the nurses and midwives are the first port of call available to people rather than doctors.

Icons Exhibition
27 June- 12 September (All campuses)
Inspiration for this exhibition has been taken from the BBC ICONS series first shown at the beginning of 2019 and broadcast again  during June/July. The public were asked to assess and vote for icons from seven different categories of human excellence. Four figures were put forward in each category: Leaders, Explorers, Scientists, Entertainers, Activists, Sports and Artists/Writers. Following the public vote on the BBC show, an overall winner was selected, the brilliant mathematician and logician Alan Turing, who is known as the father of modern computing.

Several library staff contributed to writing articles about our Icons listed. We like to make our exhibitions interactive so we asked people to vote for their favourite icon or suggest somebody else they thought should be one.

We also created a Spotify list which included songs that were either written/sung by icons or the lyrics were about them.

The exhibition was well received by visitors to the libraries over the summer.You can read more on our blog

Where are you going? (Harcourt)
A world map was put up at the beginning of summer and staff and students asked to pin-point where they were going. This had a really good response. 39 places were listed from UK, Europe, Africa, Asia, Oceania, North America and South America.

Bird Walk 11 July (Headington)
Bob Pomfret organised a staff bird walk at Warneford Meadow, a wonderful wild space sitting between the Warneford and Churchill hospitals. The birds put in an appearance too: long tailed tits, a variety of finches, a very obliging blackcap and a kestel. 16 species in all. This was the first staff based activity. There is hope to provide an activity once a month.

Article taken from The Library and Learning Resources Update, Autumn 2019

Save money by learning how to use the library to stream TV shows and films, borrow fiction … and much more.
Sure, we’ve got your textbooks and journal articles - but we ALSO have lots of things to help you relax 😎
We have students and staff from all over the world 🌎
“Help! I don’t know what to read!”
We’re sorry but our Harcourt Hill campus currently has no internet or network access. We’re working to fix this with our external supplier as a matter of urgency. Staff and students should check their Brookes email for further information. The library is open for study and items can still be borrowed.
These brand new bitesize study skills books from @sage_publishing will be on the shelves in Headington library very soon!

Making the best use of Library resources